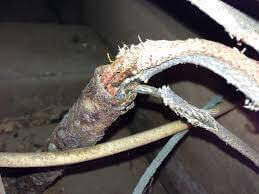 When this happens, the copper in the cable can become exposed, leading to a potential risk of electric shock, fire or an immediate loss of power due to a short circuit rupturing the protective fuses.

Initially, electrical installations involved the use of sheathed wires and were installed in most government structures, workplaces and residential homes between the 1880s and 1910s. After this period, the installations mainly involved the utilisation of Vulcanised Indian Rubber (VIR) electric cables to make up the wiring system of most homes as well as other buildings.

As we have previously mentioned, Vulcanised Indian Rubber cables were rampantly used in Australia between 1910 to late 1950s. A typical VIR cable consists of a tinned conductor that features a rubber coating. The conductor is tinned to prevent the rubber from sticking to the conductor. The thickness of the rubber usually depends on the designated operating voltage of the wire. To help prevent the conductor against moisture damage, a cotton bradding is placed over the rubber insulations.

The rubber offers an abrasion-resistant, waterproof, corrosion-resistant and protective layer for the insulated electric cable. This type of electrical wiring is still available in a significant number of Australian homes. Due to the potential dangers that VIR cables pose to the safety of homeowners, they are no longer accepted for domestic applications.

What are the potential dangers of VIR cables?

It has been proven that with time, VIR cable wiring systems may break down thus becoming extremely hazardous. To be more precise, the insulation material used on VIR cables will dry out and become brittle with time hence leaving behind exposed live electrical wires. What’s more, the earthing system can easily become compromised from any alterations.

It is imperative to note that the major threat which arises from VIR electrical wiring is associated with insulation. On most occasions, this type of insulation doesn’t age well. After some time, the insulation on this type of electrical cable usually crumbles away thus leaving behind live conductors exposed in critical areas within the house such as roof cavities and walls. Apparently, this is a serious electrical problem that significantly increases your risk of electrical fires, injuries, shock as well as electrocution.

It is also critical to reiterate that VIR electrical cables don’t often age well. As a result, they can easily result in inconsistent power flow and this may not bode well with your household electrical appliances. VIR wiring equally lacks an earth wire which is ideal for earthing metal-related fittings. All these issues can significantly put your life as well as the life of your family at great risk of electricity-related issues.

What is the solution?

The first step is to establish whether your house, business premise or even your office features these dangerous cables. If you have a building that was built nearly fifty years ago, then the chances are high that you have VIR wiring in your home. Of course, the best way to know and confirm if indeed your house has VIR cables is to contact a qualified master electrician to come and assess your house. This is a potentially dangerous electrical repair project and DIY projects are strongly discouraged.

Due diligence should guide you toward finding a reputable electrical contractor. The permanent solution would be to find a qualified professional electrician to eliminate all the available VIR wiring in your house.

After this, they should be replaced with modern electrical cables with RCD. Of course, your new wiring system must equally come with a functional circuit breaker protection at the switchboard. Simply put, if you suspect you have this kind of electrical problem, you should seriously consider rewiring your entire electrical system.